I had only enough energy today to move from the bed to the couch.

Yesterday 10 inches of beautiful snow was dumped from the sky onto our house. The school and even Mr. LbF's work called a "snow day". The night before the storm hit I fell asleep with dreams of marshmallows floating in mugs of hot cocoa. And my little family sitting in front of the fire together under one blanket playing footsie. That didn't happen.

Sleep did not come easy that night. Mr. LbF fell ill with a nasty head cold. Just the sound of him trying to take in air was enough to wake the neighbors.

All to soon the sun was up and so was the baby. I reluctantly dragged myself to the kitchen and fixed the first of many meals. The rest of the day crawled by and consisted of making meals, shoveling tons of snow from the driveway, picking up after ungrateful children with cabin fever, and caring for a man with a real fever.

I was so tired and mad I took it out on the only person that could not get away from me. As I bitched at him Mr. LbF said there was a total double standard and that when I am sick he is much nicer to me. He was right.

I was not excited to find out that today, at least for the children, it was going to be another "snow day". By the time my cold meds had kicked in I had used up an entire box of tissues. Now I was sick.

This morning after Mr. LbF (who was feeling better) left for work I corralled all our kids into the living room, turned on the TV and curled up on the sofa. Every once in a while I would open my eyes take a head count and bark an order. Toy Story the movie was still on the TV so I knew I could get away with a few more winks. My big girls sat side by side in the big chair hovered over my lap top.

I sat up like a hungry bear after the winter and observed the end of Toy Story. But something was wrong. It was not the same movie. I looked at the clock and it was 1 pm. I had slept through a Pixar marathon. It was then I started to notice other "wrong" things. The big girls were now sitting side by side but they were hovered over my husband's lap top. The baby was playing sweetly with blocks on the floor next to me but he was sporting a greasy Jerry Curl hair do. I asked Larry what happen to his head. "Oh Moe rubbed lotion on his head, we told her not to." I stood up and stepped into an empty bag of Goldfish crackers. Cracker dust stuck to my foot. I walked into the kitchen. There had been 1/2 of a sheet cake when I had laid down, it was gone. A bag of toaster waffles had been left open and thawed out on the counter. There were 4 containers of yogurt each with only one bite taken. Two plastic cups of lemonade had overflowed when poured and were stuck to the dining room table.

My reliable children had fended for themselves and the house reflected it. I was very proud of them. Not one thing had happened that could not easily be wiped away! And that is when Moe came running in to the kitchen. The kitty robe she was wearing fell open. There it was, the undeniable evidence that she had been left to her own devices. She was marked and I would have to explain myself. I asked her what she had written in blue marker all over her chest and she told me it was her name and a little picture. I asked why she had used herself as a canvas and she said she could not find any paper. If nothing else my resourceful clan had kept themselves well fed and creatively entertained.

I'm booting my children out to play in the snow and will heat up the cocoa as they play. I will drink mine with a side of dayquil and 3 marshmallows! 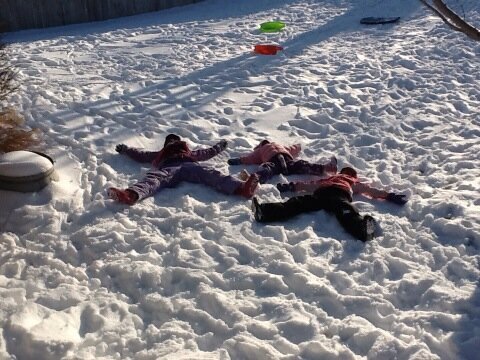